One Night More:
​the final cut

ONE NIGHT MORE, an LPE Films & Louis Holder Films Production, is an ambitious ultra micro-budget independent feature film, with development and pre-production commencing in Early 2016 and filmed over the course of Summer by a large mixture of first-time filmmakers and experienced professionals, from different backgrounds.

Synopsis
Two people, a shy, aspiring photographer venturing into the heart of London for the very first time and an arrogant street dancer with ambition in his stride, ONE NIGHT MORE is the story of how two people can meet and change each others lives forever. Change is an inevitable thing, and a largely prevalent theme in the film, and how Change affects young and confused hearts.

Our Inspiration
The film's inspiration drew from bot independent & contemporary films for inspiration - such as Lost In Translation, Drive, Palo Alto, Eden and Carol. There are similarities and differences in these films; some are perhaps written more like a traditional, cohesive scripted narrative while others are precarious, and showcase the more mundane yet integral aspects of our lives, whether that be using experimental cinematography or subverting genre conventions and in some respects - presenting these aspects as 'care-free'.
The Team 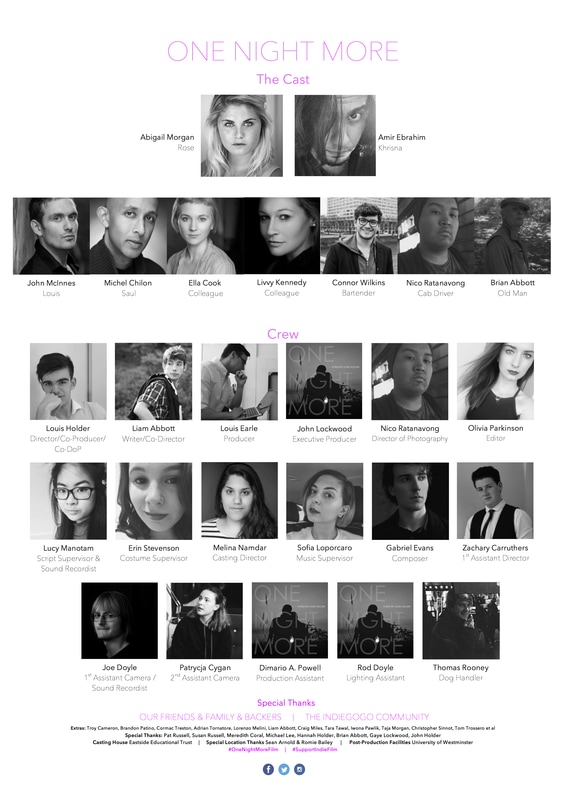 For more information about the film, it's development, creation and vision in detail - click on the website: www.onenightmore.weebly.com